Jonathan Gonzales, Lucas Jatobá and Christian Matute Sagbay. Jonathan was born in Tuxtepec, Oaxaca, Mexico, and grew up in southern California. He has spent the last 12 years learning earth living skills and ancestral ceremonial ways with many teachers and elders, combined with participating in Indigenous, earth-based ceremonies along with a quest to connect more deeply with his ancestral lineage, which is Indigenous Taino from Puerto Rico, Chinanteco from Mexico, and African). Lucas Jatobá is a photographer and filmmaker born in Manaus, northern Brazil. He had been living in Rio de Janeiro since 2014, where he went to study Anthropology at the Fluminense Federal University. Lucas started working as a freelancer, doing professional and volunteer documentation works on topics related to human rights, especially issues related to urban social issues. Christian Matute Sagbay incarnated on the lands currently referred to as Gualaceo, Ecuador. Not too long ago, it was kichwa/kañari territory. This recognition of land and language has drawn Christian to the work of language justice. He is currently exploring this avenue of healing while keeping in mind the need for future generations to decolonize themselves through expansive and yet connective land-based principles. 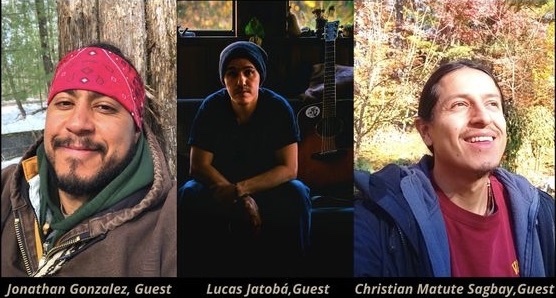