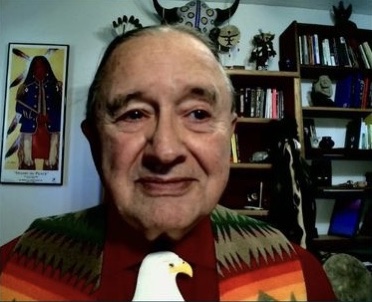 TINK TINKER discuses the 50th year of commemoration of Vine Deloria Jr's book GOD IS RED (1972) also details the hardships faced by Native Americans as their country was [is] quickly flooded with foreigners eager for land and other resources. Deloria links the anthropocentrism of Christian orthodoxy and subsequent American economic philosophies with increasing environmental upheaval. Dr. Tink Tinker. Dr. Tinker is the Clifford Baldridge Emeritus Professor of American Indian Cultures and Religious Traditions at Iliff School of Theology in Denver, Colorado. He is a citizen of the Osage Nation (wazhazhe) and has been an activist in urban American Indian communities for four decades. He joined the faculty at Iliff School of Theology in 1985 and brought an American Indian perspective to this predominantly euro-christian school. Dr. Tinker is committed to a scholarly endeavor that takes seriously both the liberation of Indian peoples from their historic oppression as colonized communities and the liberation of euro-christian (White) Americans, the historic colonizers and oppressors of Indian peoples, whose self-narrative typically avoids naming the violence committed against Indians in favor of a romance narrative that justifies their euro-christian occupancy of Indian lands.