Dr. Marlina Rose Selva (Psy.D., LMFT) lives in the San Francisco Bay Area on traditional Ohlone land. Dr. Selva is of Nicaraguan, Mexican, Mescalero Apache and Greek descent. Marlina is a Licensed Marriage and Family Therapist and has worked in the field since 2005. She has a Bachelor of Arts degree in Psychology from University of California at Los Angeles (UCLA). She earned her Master of Arts and Doctor of Psychology degrees in Marital and Family Therapy from the California School of Professional Psychology (CSPP) at Alliant International University in Irvine. Dr. Selva currently works in private practice with adolescents and families, specializing in foster care and adoption. She provides presentations to parents, educators and administrators on topics related to mental health. Dr. Selva also serves on the Board of Directors of the Ohlone Audubon Society, bringing an Indigenous perspective to conservation and environmental advocacy towards the protection of habitat for birds and other Native species. She advocates strongly with the local community for creek protections. Her activism involves protecting Indigenous rights, land and ways of life.

Charles Lyons is a producer, director, writer, video editor and content creator with a deep background in reporting on and making content related to the environment, human rights and culture. He has contributed articles to The New York Times and produced, written and edited documentary shorts for the UN in Brazil, India and Japan; served as Executive Producer at an environmental non-profit, producing a series with The NewsHour/ PBS; and worked as a freelance writer/producer for ABC News and as a staff reporter for Variety. Charles holds a doctorate in film and theater from Columbia University and is the author of the book, “The New Censors: Movies and the Culture Wars.” Charles founded Bright Leaf Pictures in 2021. https://brightleafpicturesllc.com/. Charles and Tiokasin discuss an article that Charles co-wrote with Charlie Espinosa, recently published in Mongabay, a U.S.-based non-profit conservation and environmental science news platform, on the continuing struggle by Indigenous people in Suriname against illegal gold mining on their territory, with funding support from Amazon Aid Foundation. “Can Two New Bills Reshape Indigenous Rights and Illegal Gold Mining in Suriname?” Read the article: https://bit.ly/3UeBuf3 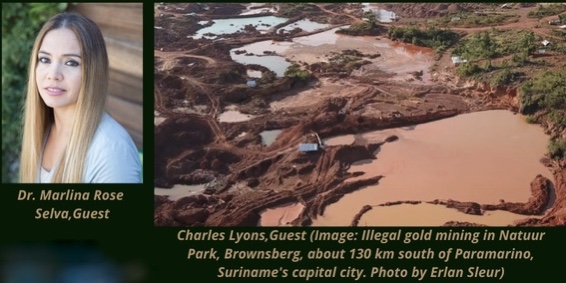