Jennifer Robin (Choctaw) is the owner of Ofi Ni Productions. Jennifer is a multiple award-winning producer, radio host, and television segment producer. Her weekly two-hour live program, “Resilience Radio,” presents Native American authors, artists, musicians, storytellers, and activists and showcases contemporary Native music. Over the years, Jennifer has interviewed hundreds of well-known Natives, including Buffy Sainte-Marie, Dennis Banks, and John Trudell. “Resilience Radio” has an international following and is known for the authentic Indigenous voice. Jennifer’s fieldwork in Cannonball, North Dakota, during the Standing Rock protest is available as a one-hour audio special. She was a broadcaster for SPIRIT Radio, Standing Rock’s official station. Jennifer’s ability to engage in honest, in-depth interviews is as entertaining as it is informative. She is a member of the Native American Journalists Association (NAJA).

Doug George-Kanentiio was born and raised at the Mohawk Territory of Akwesasne. Before enrolling at Syracuse University and then the Antioch School of Law, he attended school on and near the reservation. Doug was a Native American Journalists Association co-founder before serving the Mohawk Nation as editor of the journals Akwesasne Notes and Indian Time. He worked with the late Vine Deloria, Jr., on the Traditional Knowledge conferences before joining the Board of Trustees for the Smithsonian’s National Museum of the American Indian. Doug is vice-president for the Hiawatha Institute for Indigenous Knowledge, a non-profit higher learning facility based on Iroquois principles. He resides in Oneida Iroquois Territory. 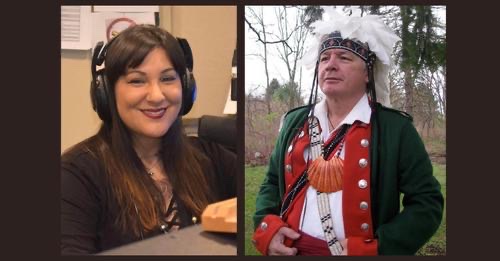