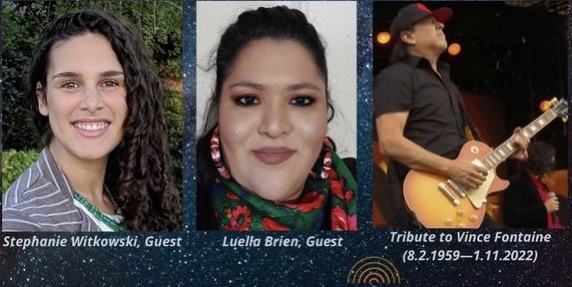 In the first half-hour, Tiokasin speaks with Stephanie Witkowski. Stephanie is executive director of 7000 Languages, a nonprofit organization that helps Indigenous around world teach, learn and sustain their languages through technology. 7000 Languages creates free online language-learning courses in partnership with Indigenous, minority, and refugee communities so they can keep their languages alive. Stephanie has more than 10 years of experience in both language revitalization and the non-profit sector. She holds a M.A. in Linguistic from the University at Hawai’i Mānoa with an emphasis in Language Documentation and Conservation and has worked with speakers of multiple under-documented languages, including Native languages of California, the Pacific, and Russia. To find out more about 7000 Languages, visit 7000.org.

In the second half-hour, Tiokasin welcomes Luella Brien. Four Points Media is the dream of Luella, an Apsáalooke journalist with nearly 20 years’ experience in the news industry. Luella has over the last decade envisioned a media company that produces the highest quality investigative and public service journalism. Four Points Media, Inc. is the embodiment of that vision. Luella is the decedent of powerful healers, educators, and leaders and, most importantly, storytellers. She has a degree in journalism from the University of Montana, a 2002 graduate of the Freedom Forum's American Indian Journalism Institute and a 2004 Chips Quinn Scholar. Luella has three children and lives on the Crow Indian Reservation in Southeastern Montana.

On Tuesday, January 11, First Voices Radio lost a friend, Vince Fontaine (Sagkeeng First Nation). Vince was a celebrated, JUNO Award-winning Ojibwe musician and a major force in the Canadian music industry for more than three decades, Vince was the founder of the bands Eagle and Hawk and Indian City. We remember Vince with his Indian City band’s song “Star People” from the band’s fourth album “Code Red,” released in November 2021.