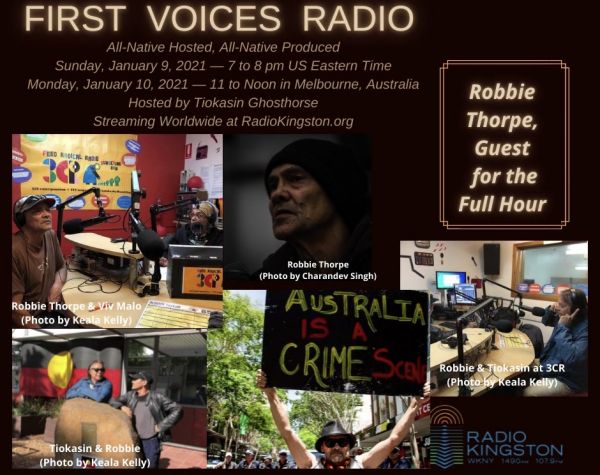 It is our honor to spend the full hour with Robbie Robert Thorpe (Gunai/Mara), one of the most outspoken, well-known and respected Aboriginal rights activists in Australia. He is a former volunteer worker at the Aboriginal Tent Embassy in the Australia capital of Canberra. Aboriginal Tent Embassy has been a permanent protest occupation site since 1972 and is a focus for representing the political rights of Aboriginal Australians located. Robbie is the host of two radio programs at 3CR 855 AM Community Radio — “radical radio, community radio” — in Melbourne, Australia. “Bunji’s Fire” is a historically informed, critical analysis of Aboriginal affairs and the ongoing political movement for land rights, treaty, sovereignty and the cessation of genocide, which also features the best of blak music. It’s heard Wednesdays in Melbourne, from 11 am to 2 pm. “Blak ‘n Deadly” airs Fridays from 11 am to noon in Melbourne. The show informs listeners about the latest news in Indigenous music and theatre with First Nations presenters. When 3CR Community Radio hit Melbourne’s airwaves in 1976 it was Australia’s first community-owned and community-run grassroots radio station. Outspoken and independent, the station still gives voice to issues that would otherwise go unheard, and to people striving for political and social justice. Listen to 3CR online at 3cr.org.au. Both of Robbie’s shows can be streamed live on Tuesdays and Thursdays starting at 7 pm Eastern Time. (A very special thanks to Viv Vivian Malo for helping to coordinate this interview for First Voices Radio.)