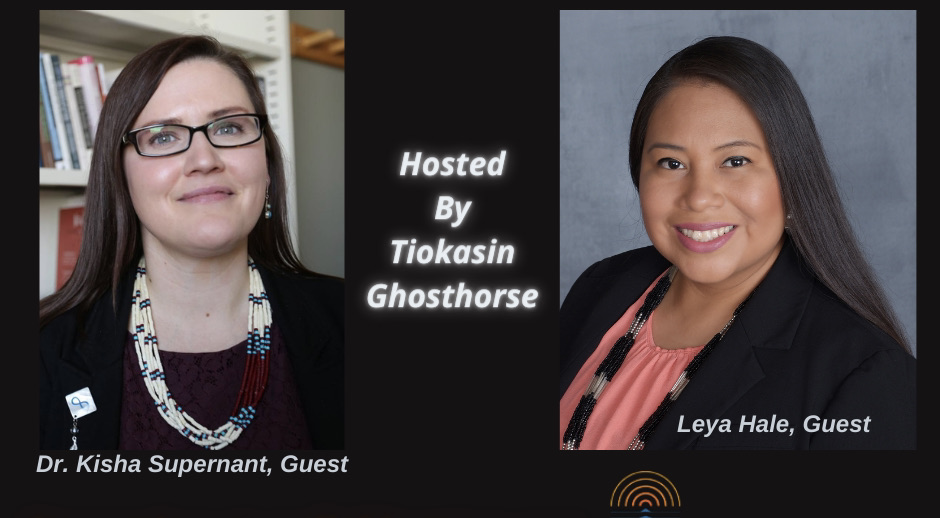 Dr. Kisha Supernant. She is Métis, Papaschase and British, and the Director of the Institute of Prairie and Indigenous Archaeology at the University of Alberta. An award-winning teacher, researcher, and writer, her research interests include Indigenous archaeology, the use of digital technologies in archaeology, and heart-centered archaeological practice. She is the Director of the Exploring Métis Identity Through Archaeology (EMITA) project, a collaborative research project which takes a relational approach to exploring the material past of Métis communities, including her own family, in western Canada. Recently, she has been involved in work locating the resting places of ancestors and relatives in historic cemeteries and around residential schools with Indigenous communities.

In the second half-hour, Tiokasin welcomes back Director and Producer Leya Hale to talk about her upcoming documentary film, “Bring Her Home.” Leya comes from the Sisseton Wahpeton Dakota and Diné Nations. She makes her home in Saint Paul, Minnesota with her companion and children. She is a producer for Twin Cities PBS and is best known for her first feature documentary, The People’s Protectors, a Vision Maker Media grant production and winner of the 2019 Upper Midwest Emmy Award for Best Cultural documentary. In 2020, Leya was awarded the Sundance Institute Merata Mita Fellowship for Indigenous Artists and attended the 2020 Berlinale European Film Market as a NATIVe Fellow. Leya is currently working on her second feature, "Bring Her Home," a documentary that follows three Indigenous women fighting to vindicate and honor their missing and murdered relatives. When not producing feature films, Leya works on a variety of short form content in efforts to create social change within the Midwest region. Watch the trailer for “Bring Her Home”: https://youtu.be/eEJQlzvsyo0