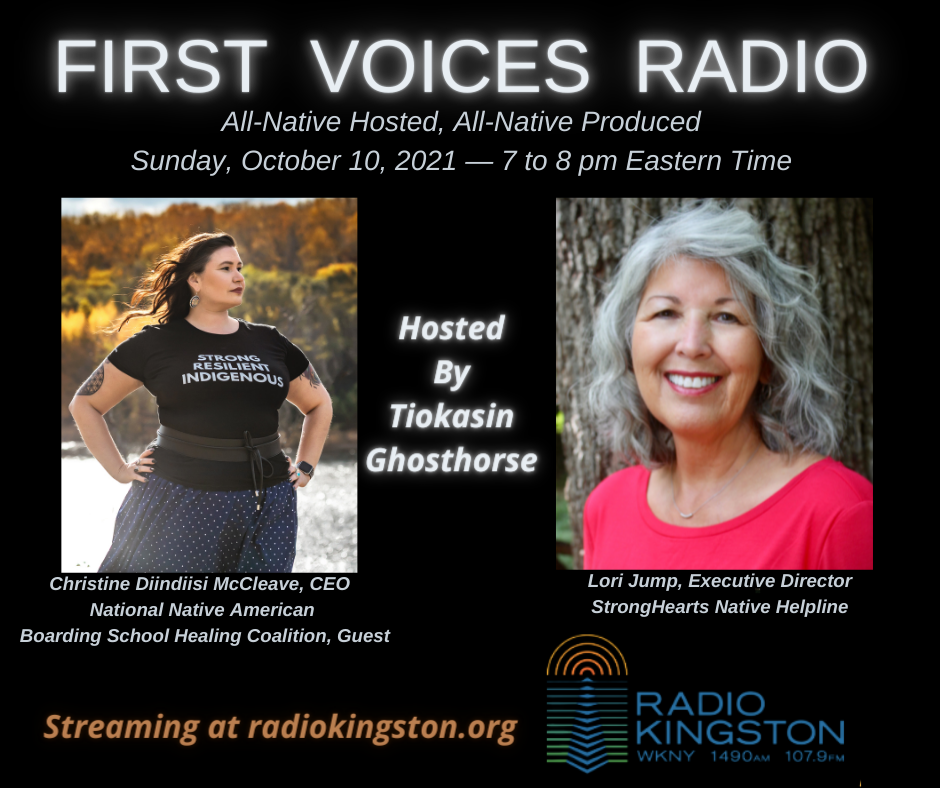 In early June of this year, the remains of 215 Indigenous children were found at the Kamloops Indian Residential School in British Columbia, Canada.The school was one of the largest Indian residential schools in Canada and operated from the late 19th century to the late 1970s. Indigenous children, some as young as 3 years old, we were forcibly taken from their families and put into residential schools in Canada. This is also what happened in Native boarding schools in the United States during the same time period — children’s hair was cut off, they were forbidden to speak their Indigenous languages, and to see their families. Some didn’t return home for many years and some never returned. Countless children suffered terrible indignities, mistreatment, and horrors, including beatings, rape and other forms of sexual violence, disease, and even death. Residential school experiences continue to adversely affect many survivors today. Host Tiokasin Ghosthorse speaks with Christine Diindiisi McCleave (Turtle Mountain Ojibwe), CEO of the National Native American Boarding School Healing Coalition about the organization’s support of the introduction of a U.S. Bill for a Truth and Healing Commission on Indian Boarding School Policies. The organization’s mission is to lead in the pursuit of understanding and addressing the ongoing trauma created by the U.S. Indian boarding school policy. Christine is a leader and an activist for Indigenous rights advocating for truth, justice and healing for the genocidal policy of U.S. Indian Boarding Schools. She has dedicated her life and work to pursuing truth and healing for the Indigenous survivors of historical trauma at the hands of colonialism and settler-states. Christine is one of the primary investigators for the “Child Removal in Native Communities: An Anonymous Survey” currently being conducted with the University of Minnesota, and has published several scholarly articles, including one titled, “The Catholic Church and U.S. Indian Boarding Schools: What Colonial Empire Has to do With God” in the Journal of the West: Catholic Indian Mission Schools: Colonial or Decolonized spaces in the American West (Vol. 59, No. 3, Summer 2020). In 2020, she was instrumental in writing H.R. 8420 — Truth and Healing Commission on Indian Boarding School Policy Act — the first bill ever introduced to a commission addressing boarding school policy in the U.S. Find out more about the National Native American Boarding School Healing Coalition at https://boardingschoolhealing.org/

October is Domestic Violence Awareness Month. According to the National Institute of Justice, domestic violence disproportionately impacts Native Americans and Alaska Natives, with more than 1.5 million Native women and 1.4 million Native men experiencing violence during their lifetime, often by non-Native perpetrators. Domestic violence among Native Americans is not natural or traditional. The domination and subjugation of Native Americans began with colonization and continues today. Colonization was responsible for the theft, occupation, pollution and exploitation of Indigenous lands. Today, Natives who are living in tribal communities on or near lands that are exploited by extractive industries face the highest rates of domestic and sexual violence. Host Tiokasin Ghosthorse talks with Lori Jump (Sault Ste. Marie Tribe of Chippewa Indians), executive director of StrongHearts Native Helpline, a 24/7 culturally appropriate domestic, dating and sexual violence helpline for Native Americans and Alaska Natives. Lori is the former executive director and current board member of Uniting Three Fires Against Violence, Domestic Violence and Sexual Assault tribal coalition in Michigan. She served on the Federal Task Force researching Violence Against American Indians and Alaska Native Women and has more than 26 years of tribal advocacy experience in her community. The tribal programs that Lori has developed include: victim services and advocacy; tribal court and law enforcement programs; victims advocacy and women’s shelters. StrongHearts Native Helpline can be reached by calling or texting 1-844-762-8483 or clicking on the chat icon at strongheartshelpline.org.