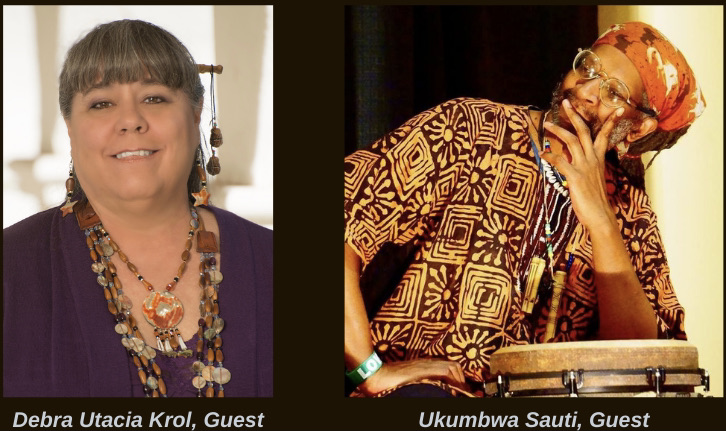 Debra Utacia Krol is an Indigenous affairs reporter at the Arizona Republic. She is a citizen of the Xolon Salinan Tribe. Debra’s current coverage area — which is supported by the Catena Foundation and the Water Funder Initiative — is the intersection of climate, culture and commerce. Debra has more than two decades of expertise in reporting on Native issues for publications large and small, with an emphasis on environmental and science issues, and has been a contributor to two books on Native traditions. In this segment, Debra and Tiokasin discuss a recent article that she wrote for the Arizona Republic, “Blythe Intaglios: Tribes work to protect ‘sleeping giants’ of the desert.” Find Debra's story at: https://bit.ly/2XC3AYz

Tiokasin discusses "critical race theory" with regular guest and friend Ukumbwa Sauti. This is Part 1 of a 2-part series that will continue next week. Ukumbwa Sauti is an initiated Elder in the Dagara tradition from Burkina Faso in West Africa. He is a diviner, numerologist, and spiritual counselor. He is a Producer and Partner at Moja Mediaworks, developing the World Ancestor Concert, and facilitating Social Justice workshop experiences along with forwarding progressive messaging through online merchandising. Ukumbwa presents discussions and workshops through the Men’s Work initiative, engaging patriarchy and men’s violence against women and the LGBTQ community. He has taught Cultural Media Studies and Video Production for 17 years in higher education; and has been active in the Pan-African movement, Black Lives Matter and other anti-racism work and the Occupy/Decolonize to Liberate movements. Ukumbwa has presented at spiritual conferences and political events in the New England region, California and Barbados; and has been active in creating ritual work in Boston, New York and Toronto. He can be reached for bookings and consultation on Facebook, Twitter and email at ukumbwa@gmail.com. Find his current work at www.worldancestorconcert.com, on Facebook and other Global Media Network platforms.