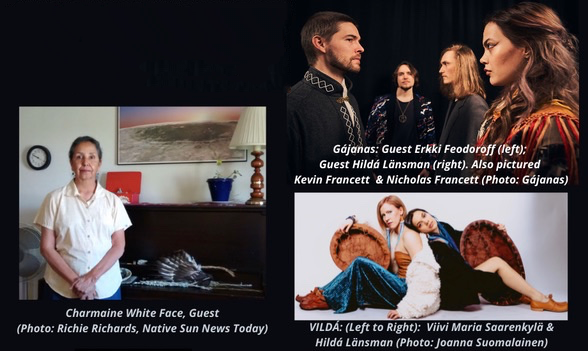 Charmaine White Face. Charmaine is Oglala Tituwan Oceti Sakowin. She is a great-grandmother, scientist and writer. Tiokasin and Charmaine discuss her column, “Fighting for Religious Freedom,” which was published in Native Sun News Today in Rapid City, South Dakota on May 20, 2021. “Only 43 years ago, in 1978, the American Indian Religious Freedom Act (AIRFA) was passed in the United States Congress. That’s not that long ago,” writes Charmaine. "Many of us were adults who remember this. The fact that such a Bill had to be written in the first place, and then ultimately passed was astonishing because it exposed the hypocrisy of the United States. The establishment of the United States and the U.S. Constitution were based on Religious Freedom, as long as it was Christianity. That is not Freedom."

Hildá Länsman (Sámi) and Erkki Feodoroff (Sámi), two of the four musicians from the band Gàjanas, hailing from Inari-Utsjoki in Finland’s far north. Hildá is the band’s lead vocalist and joiker and Erkki plays bass (the other two band members are Nicholas Francett, guitar and Kevin Francett, drums). Gájanas, or “echo,” performs northern Sámi ethno-progressive music. Echoes of Sámi tradition encounter the present moment and form a colorful combination in their music, a dialogue between traditional and modern Sámi music. In addition, their music emphasizes the strong nature connection of the Sámi people. Hildá Länsman and Viivi Maria Saarenkylä make up the duo VILDÁ. Hildá and Viivi bring things together via joik and accordion in a dynamic and refreshing way, combining mystical yoiks, swinging rhythms and improvisation. Influenced by contemporary pop music and Finnish folk music, VILDÁ takes listener to the northern fells where the winds of the Sámiland blow. Gàjanas and VILDÁ have been nominated this year for a Summer Solstice Indigenous Music Award in the category of “International Indigenous Artist-Group Recording of the Year.” The Summer Solstice Indigenous Music Awards will take place on June 12 at the National Arts Centre in Ottawa, Ontario. For more information: https://bafesfactory.fi/gajanas/ and https://bafesfactory.fi/vilda/. Both bands can also be found on social media. For more information about the Summer Solstice Indigenous Festival and Music Awards: https://summersolsticefestivals.ca/