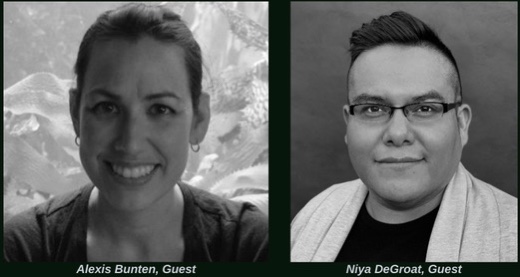 ALEXIS BUNTEN, (Aleut/Yup’ik) has served as a manager, consultant and applied researcher for Indigenous, social and environmental programming for over 15 years. After receiving a BA in Art History at Dartmouth College, Alexis returned to Alaska, where she worked at the Sealaska Heritage Institute, and the Alaska Native Heritage Center in programming. Subsequently, Alexis earned a PhD in Cultural Anthropology at UCLA, and has served as the Project Ethnographer for the Intellectual Property Issues in Cultural Heritage (IPinCH) project, and as a Senior Researcher at the FrameWorks Institute. Alexis is an accomplished researcher, writer, media-maker, and curriculum developer. She has published widely about Indigenous and environmental issues, with articles in American Indian Quarterly, the Journal of Museum Education and American Ethnologist. Her 2015 book, “So, how long have you been Native?” Life as an Alaska Native Tour Guide” won the Alaska Library Association Award for its originality, and depth. In addition to writing, Alexis has contributed to several Indigenous-themed productions, including co-producing and writing the script for a documentary nominated for the Native American Film Awards. Alexis has developed educational material for both formal and informal learning environments including university level-courses as well as lifelong learner curriculum. This week, Alexis is a panelist on “The Indigenous Rights of Nature,” a panel discussion organized by Vision Maker Media in partnership with Bioneers’ Indigeneity Program.

NIYA DeGROAT is a Diné fashion writer and multidisciplinary creative based in Flagstaff, Arizona. He is originally from Mariano Lake, New Mexico and a citizen of the Navajo Nation. He is also the former Director of Multimedia for Phoenix Fashion Week with years of fashion show production under his belt, including mentoring emerging designers and models. In May 2020, Niya obtained his master’s degree in fashion journalism from the Academy of Art University. As a journalist, he aims to present an Indigenous perspective on fashion by elevating the discussion around contemporary Native fashion. His work has been published in Indian Country Today, Academy Art U News, Fashion School Daily, and Native Max Magazine. Tiokasin and Niya will be discussing Niya’s Feb. 1, 2021 column in Indian Country Today — “Wait a minute America! ‘This is stolen land’: Joe Biden’s inauguration missed the mark by including the tone deaf American folk song”: https://bit.ly/3v5DnNx