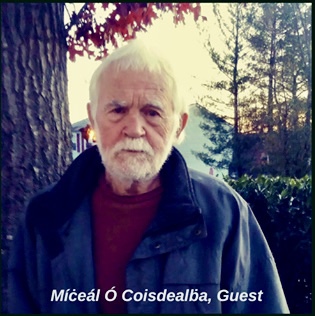 Míċeál Ó Coisdealḃa joins Host Tiokasin Ghosthorse. Míċeál is an Irish Republican activist who was born in Connemara, Ireland, a native Irish-speaking area. Following travels during his earlier years, including time in Australia and learning about the Indigenous people in that country, he moved to the U.S., and by the 1960s settled in New Jersey, where he lives today. The situation in Ireland was making the news in the U.S. back in those days; and Míċeál became involved in supporting the struggle for Irish freedom. He was National Chairman of the IPOW (Irish Prisoner of War) Hunger Strike Committee during the Irish Hunger Strike in 1981. Over the years he was involved in a number of fundraising and commemorative events to promote the cause of Irish Freedom. Also, during this time, Míċeál learned about the plight of the Indigenous people here and the great generosity of the Choctaw people, who collected money to help the starving people in Ireland during An t-Ár Mór,” the Great Genocide (also called the potato famine). Míċeál says, “I am awed by the extreme generosity shown to my ancestors by the Native Americans when they were enduring their own horrors.”

Míċeál has today undertaken a project on behalf of the Navajo Nation Covid Relief Fund in an effort to raise awareness. In solidarity with Native nations whose ancestors were forced to walk the “Trails of Tears” in the mid-19th century, Míċeál started his own walk on Thanksgiving eve 2020. “On days that I walk, I am doing 10-12 miles per day toward my goal of 5,045 miles,” he says. Míċeál ’s progress is posted regularly on his Facebook page: “Irish 4 Navajo,” where he also highlights the plight of the Navajo once again, this time in the face of the current Covid-19 pandemic.