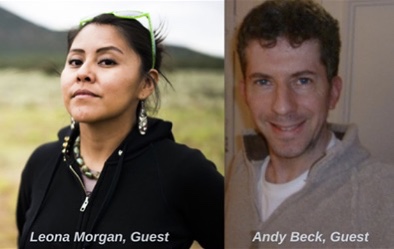 Leona Morgan (Diné, she/her), an Indigenous activist and community organizer who has been fighting Nuclear Colonialism since 2007. She is focused on preventing new uranium mining, nuclear waste dumping, and transport of radioactive materials in the southwestern United States. Leona co-founded and works with Haul No! (www.fb.com/HaulNo), Radiation Monitoring Project (www.radmonitoring.org), and Nuclear Issues Study Group (www.fb.com/NuclearIssuesStudyGroup). She also contributes to the international initiative Don’t Nuke The Climate (https://dont-nuke-the-climate.org) which addresses nuclear energy as a global climate threat. Leona is from the Navajo Nation and lives in Albuquerque, New Mexico.

In the second segment, Tiokasin welcomes Andy Beck to his first appearance on "First Voices Radio." Andy grew up in the town of Perth in Scotland, and after graduating from Edinburgh University spent the early part of his career working as a software tester and a Technical Writer in several software houses and financial firms. Andy is also a lifelong musician who sang in choirs and played classical violin in school orchestras before graduating to playing keyboards in several rock bands. He currently enjoys teaching himself to play guitar. Growing up in a small town situated within striking distance of the great outdoors has given Andy a keen interest in ecology and the natural world. He is a writer of fiction and recently finished a novel called “Arran,” which is an attempt to make sense of the age we live in — particular the ecological and climate crises — through the eyes of its five main characters. After moving about from place to place, including several years as an immigrant in Toronto, Canada, Andy is now back in his home town of Perth, Scotland. An artist, a geek, a jack of many trades but master of none is how he would choose to describe himself.