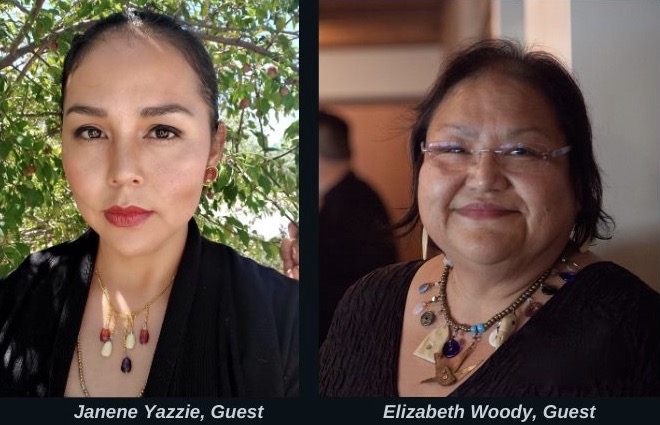 Janene Yazzie about LANDBACK, a movement that has existed for generations with a long legacy of organizing and sacrifice to get Indigenous lands back into Indigenous hands. Janene is a Diné woman from the Navajo Nation who has worked on human rights and Indigenous Rights issues for the past 15 years at the national and international levels. As an advocate, entrepreneur, and community organizer Janene works with Indigenous peoples to develop sustainable and regenerative economies through her company Sixth World Solutions. Janene also works part-time as International Indian Treaty Council's Sustainable Development Program Coordinator.

In the second half-hour, Tiokasin welcomes Elizabeth Woody, Executive Director of The Museum At Warm Springs in Warm Springs, Oregon. They will discuss a January 12 article from The New York Times — “Tribal elders are dying from the pandemic causing a cultural crisis for American Indians: The virus has killed American Indians at especially high rates, robbing tribes of precious bonds and repositories of language and tradition.” Elizabeth Woody is an enrolled member of the Confederated Tribes of Warm Springs. She is of Yakama Nation descent and is “born for” Bitter Water clan of the Navajo Nation. Elizabeth is a renowned poet, author, essayist and visual artist, and is also an educator, mentor, collaborator and community leader. Elizabeth earned a Master of Public Administration degree through the Mark O. Hatfield School of Government’s Executive Leadership Institute of Portland State University, a Bachelor of Arts degree in Humanities from The Evergreen State College, and studied Creative Writing and Two-Dimensional Arts at the Institute of American Indian Arts, Santa Fe, New Mexico. She has written three books of poetry, and in 2016, she became the first Native American to be named Oregon’s Poet Laureate. In 2018, Elizabeth received a National Artist Fellowship in Literature from the Native Arts and Cultures Foundation. Elizabeth has led writing workshops, lectures and has served on multi-disciplinary art fellowship jury panels for several foundations and arts organizations nationally.