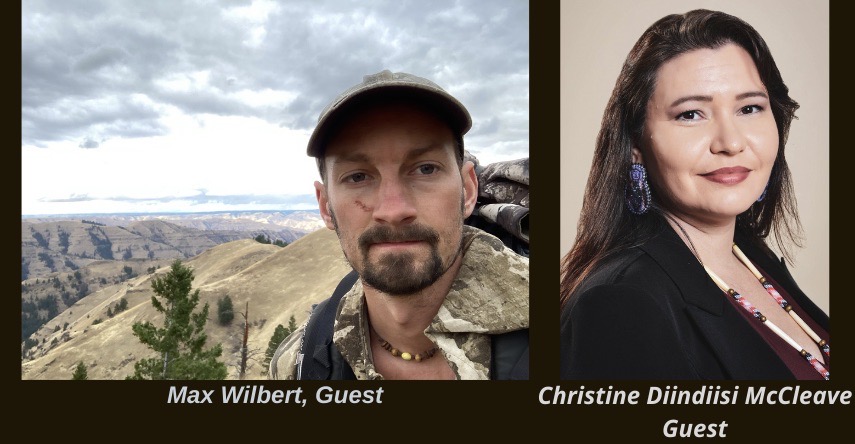 Max Wilbert. Max is a writer, organizer and wilderness guide. A third-generation dissident, Max grew up on Duwamish land in post–WTO Seattle. Max is the author of two books, most recently “Bright Green Lies: How the Environmental Movement Lost Its Way and What We Can Do About It” (Monkfish, 2021). Max’s essays have been published in Earth Island Journal, Counterpunch and Dissident Voice, and have been translated into several languages. Max has been part of grassroots political work for nearly 20 years. He has been involved in fighting both Canadian and Utah tar sands, in resisting industrial-scale water extraction and deforestation in Nevada, in advocating for the last remaining wild buffalo in Yellowstone, in solidarity work with Indigenous communities in British Columbia, and in campaigns against sexual violence. In the second half-hour, Tiokasin welcomes returning guest Christine Diindiisi McCleave (Turtle Mountain Ojibwe). Christine is the CEO of the National Native American Boarding School Healing Coalition. A descendant of boarding school survivors, Christine completed her master’s thesis at Augsburg University on traditional Native American spirituality and Christianity, and the impact of boarding schools on Indigenous communities today. Christine is a graduate of the mini–MBA program at the University of St. Thomas and holds a bachelor’s degree in communication studies from Northwestern College. The National Native American Boarding School Healing Coalition is sending 1,000 care packages to Native elders who are boarding school survivors or their direct descendants. The We Love You! Elder Care Packages, which are being carefully arranged by volunteers from the Tulalip community in Washington State, are filled with items that were created or produced by Indigenous artists, healers, entrepreneurs, companies, and friends from across Turtle Island. More information at https://boardingschoolhealing.org/elder-care-packages/