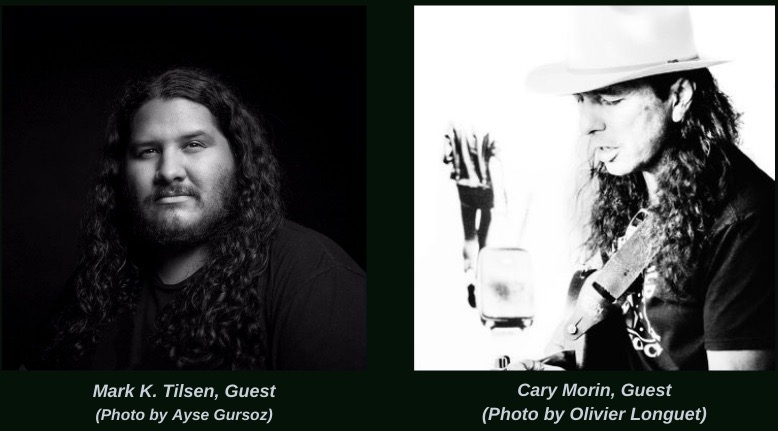 Mark K. Tilsen in the first half-hour. Mark is an Oglala Lakota poet educator from the Pine Ridge Indian Reservation. At Standing Rock Mark stepped into the role of a direct action trainer and police liaison. Since then he has led trainings and teach in’s about the lessons learned from Standing Rock. Mark recently spent six months at L’eau Est La Vie Camp helping fight against the Bayou Bridge Pipeline which is the tail end of the Dakota Access Pipeline ending in Louisiana. Recently Mark has been working with the Mni Luzahan Creek Patrol to provide basic security to our unhoused relatives along Rapid Creek in Rapid City, South Dakota. www.campminluzahan.org
In the second half hour, Tiokasin speaks with award-winning singer-songwriter and guitarist Cary Morin. Cary’s new album, “Dockside Saints,” was released in August 2020. Cary has won numerous awards for his work, particularly for his 2017 release, “Cradle to the Grave.” Born in Billings, Montana, Cary is a Crow tribal member and son of an air force officer. He spent the bulk of his youth in Great Falls, Montana, where he cut his teeth picking guitar standards at neighborhood get-togethers, before relocating to northern Colorado. There, his musical career hit the ground running with The Atoll, a band he founded in 1989 and that toured nationally, gaining a devoted following. Later, he achieved international acclaim with The Pura Fé Trio, for whom the single “Ole Midlife Crisis,” which Morin wrote and performed with Pura Fé, placed at number 17 on France’s iTunes blues chart. With The Atoll and The Pura Fé Trio, and as a solo artist, Morin has played celebrated venues across the globe, including Paris Jazz Festival, Winter Park Jazz Festival, Folk Alliance International, River People Festival, Shakori Hill Festival, the 2010 Vancouver Olympics, and most recently Rochefort En Accords festival in France and The Copenhagen Blues Festival.
Described as “one of the best acoustic pickers on the scene today,” Cary brings together the great musical traditions of America and beyond like no other. With deft finger style guitar and vocals that alternately convey melodic elation and gritty world-weariness, Cary crafts an inimitable style often characterized as acoustic Native Americana with qualities of blues, bluegrass, jazz, jam, reggae and dance. More about Cary at www.carymorin.com/