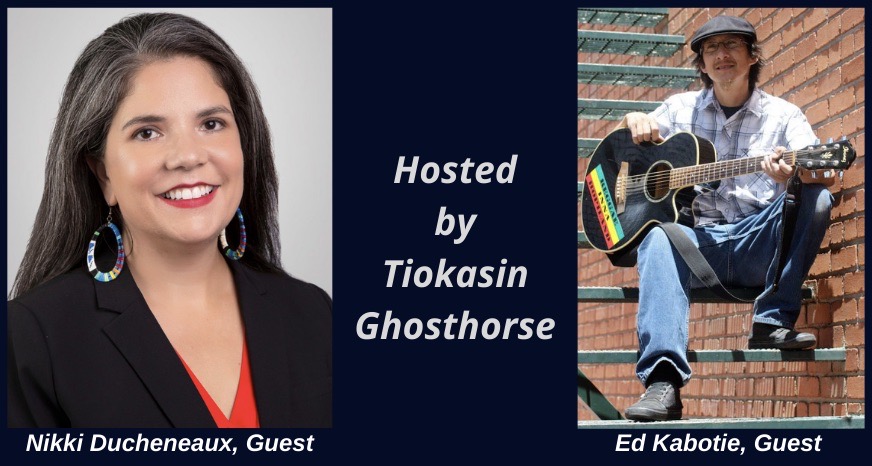 Nikki Ducheneaux. Nikki is an enrolled member of the Cheyenne River Sioux Tribe, and also Bitterroot Salish from the Confederated Salish and Kootenai Tribes. She is a founder and partner at Big Fire Law and Policy Group, a 100% Native owned, majority woman-owned law firm that focuses exclusively on federal Indian law. Nikki practices primarily in the area of litigation. She represents tribes across the country in state, federal, and tribal courts, including the US Supreme Court. Nikki has been particularly honored to represent her own Tribe in the Dakota Access Pipeline litigation. On June 23, Big Fire Law and Policy Group filed a complaint against the Trump Administration, alleging abuse of federal authority to force the Cheyenne River Sioux Tribe to dismantle checkpoints that had been set up to screen people for Covid-19 as they were coming onto the reservation. In the second half-hour, Tiokasin talks with returning guest Ed Kabotie. Ed is a multifaceted creative from the Tewa village of Khap'o Owinge and the Hopi village of Shungopavi. His creative expressions take the forms of paintings, drawings, silver craft, and multi-lingual musical compositions. Kabotie considers himself an “Edu-tainer,” using the arts and music to educate people about social justice issues related to the Indigenous people and lands of the Colorado Plateau. His reggae-rock band, Tha 'Yoties, are known for their catchy melodies, lively performances, and conscious message. Tiokasin will catch up with Ed about his recent and upcoming performances and share a few songs.