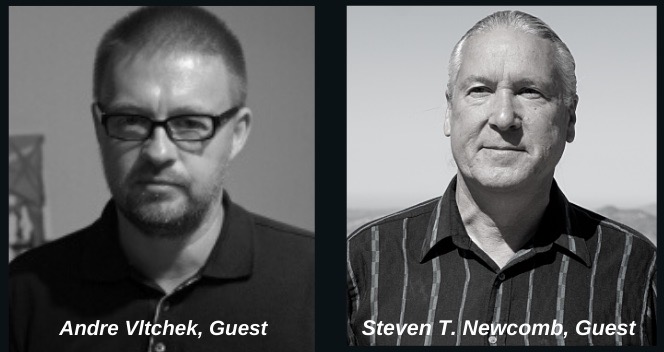 Tiokasin welcomes back ANDRE VLTCHEK. Andre — a revolutionary and internationalist —is a philosopher, novelist, filmmaker, investigative journalist, poet, playwright, and photographer who travels widely around the world reporting on the plight of oppressed peoples everywhere—including the world’s Indigenous peoples. Andre has covered dozens of war zones and has produced and directed several documentary films. A few of Andre’s books include: “Revolutionary Optimism, Western Nihilism,” “The Great October Socialist Revolution: Impact on the World and Birth of Internationalism,” and “Exposing Lies of the Empire.” His investigative works appear in countless publications worldwide. Andre’s latest book, just published in May is “New Capital of Indonesia: Abandoning Destitute Jakarta, Moving to Plundered Borneo.” It is available at https://amzn.to/2AWfwsM. Today, Tiokasin and Andre will discuss one of his latest essays, “The World Cannot Breathe: Squashed by the U.S. — A Country Built on Genocide and Slavery”: https://bit.ly/2YdoppZ. More about Andre can be found at andrevltchek.weebly.com. He tweets @AndreVltchek.

In the second half-hour, STEVEN T. NEWCOMB (Shawnee, Lenape) is a scholar, educator, author, journalist, film producer, public speaker and workshop leader/facilitator. He is internationally recognized for his more than three decades of research and writing on the origins of federal Indian law and international law dating back to the early days of Christendom, most notably focused on the religious doctrine now known in history as the Doctrine of Christian Discovery. He is author of "Pagans in the Promised Land: Decoding the Doctrine of Christian Discovery" (Fulcrum Publishing, 2008) and a Producer of the 2015 documentary film, "The Doctrine of Discovery: Unmasking the Domination Code” directed and produced by Sheldon Wolfchild (Dakota). Steven’s website is http://originalfreenations.com/. Tiokasin and Steven will discuss his latest column, “Domination and the Murder of George Floyd” (Counterpunch, June 4, 2020): https://bit.ly/2YcdBbM