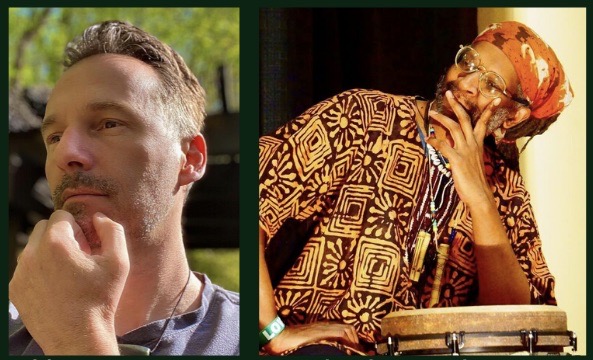 HADRIEN COUMANS. Hadrien is Co-Founder and Co-Director of Lenape Center and Advisor for Well-being. Hadrien is of service to people; supporting individuals, organizations, and communities both local and international, through public speaking, advisement, advocacy, and ceremony. Hadrien's work focuses on cultural continuance and genocide prevention. Hadrien lectures at Columbia University. He is an adopted member of the White Turkey-Fugate family. UKUMBWA SAUTI, an initiated Elder in the Dagara tradition from Burkina Faso in west Africa. He is a diviner, numerologist and spiritual counselor. Ukumbwa is a Producer/partner at moja mediaworks, developing the World Ancestor Concert and facilitating social justice workshop experiences along with forwarding progressive messaging through online merchandising. He is presenting discussions and workshops through the Men’s Work initiative, engaging patriarchy and men’s violence against women and the LGBTQ community. He has taught cultural media studies and video production for 17 years in higher education. Ukumbwa also has been active in the Pan-African movement, Black Lives Matter and other anti-racism work and the Occupy/Decolonize to Liberate movements. He has presented at spiritual conferences and political events in the New England region, California and Barbados; and has been active in creating ritual work in the Boston, New York and Toronto, Canada. Ukumbwa can be reached for bookings and consultation on Facebook, Twitter and email at ukumbwa@gmail.com. Find his current work at www.worldancestorconcert.com, on Facebook and other Global Media Network platforms.