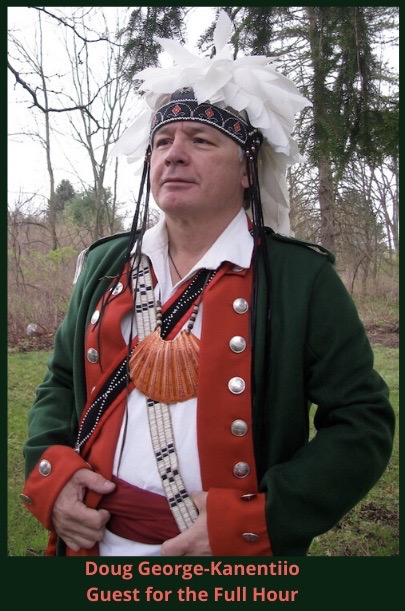 Tiokasin Ghosthorse welcomes back DOUG GEORGE - KANENTIIO for an important hourlong episode focused on a recent column by Doug, titled “How the Mohawks Responded to Historical Plagues” (https://bit.ly/2w50pv7). Doug relays the experiences of the Haudenosaunee people over the past several centuries as they dealt with wave after wave of diseases, and what all of us can learn from their history, knowledge and experiences. Doug says that the world will find out that COVID-19 is not one wave of illness but rather a series of events that will strike the planet just as they did to the Haudenosaunee. However, after waves of disease over time, the Haudenosaunee had to reorganize and find ways to endure. Doug says, “You need to reaffirm your traditions. You cannot give them up. You need to reconnect with the natural world, which means a renewed emphasis on rituals and ceremonies that tie you to the natural world. You need to reemphasize your dependency on the plant and animal beings. You need to reemphasize your connection with the sky people and thunder beings, and to reaffirm your dependency on other life forms than ourselves. Technology, the way it’s understood, is not the singular solution. You also must do practical things. You must have personal hygiene at the highest level and your domestic rituals have to be defined by the highest degree of cleanliness.” Doug believes that the current pandemic is “a result of a disruption of the natural world and not just the eating of bats or other animals. There is a leap from the environment to the infected animals to humans. If you don’t have rituals that tie you to the Mother Earth and don’t acknowledge Mother Earth, if you don’t speak to the plants and treat all animals as only objects for human consumption this is going to happen. This is only the first wave and it was predicted.” Doug and Tiokasin talk about putting aside fear during this time and coming up with applicable solutions based on Indigenous knowledge. "No illness takes place without some kind of healing factor in the natural world,’ says Doug. He stresses the importance of exercise, the use of traditional medicines and care of our elders.  We recommend that listeners check out The Hiawatha Institute of Indigenous Knowledge, a non-profit educational organization (on which Doug serves as vice-president) designed to bring sustainability and Iroquois cultural knowledge to the world. Teachings are offered online. Doug says, “We must elevate Mother Earth to a legal standing with natural rights, the same as human beings, and give people access to Indigenous knowledge. This is the way humans will survive on this planet.” Doug George-Kanentiio was born and raised at the Mohawk Territory of Akwesasne. He attended school on and near the reservation before enrolling at Syracuse University and then the Antioch School of Law. He was a co-founder of the Native American Journalists Association before serving the Mohawk Nation as editor of the journals Akwesasne Notes and Indian Time. He worked with the late Vine Deloria, Jr. on the Traditional Knowledge conferences before joining the Board of Trustees for the Smithsonian’s National Museum of the American Indian. He is currently vice-president for the Hiawatha Institute for Indigenous Knowledge, a non-profit higher learning facility that is based on Iroquois principles. Doug resides on Oneida Iroquois Territory with his wife, the renowned Grammy-award winning artist Joanne Shenandoah.