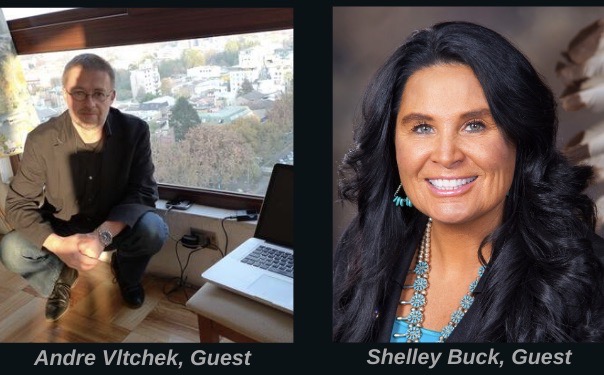 In the first half-hour, Guest Host KEALA KELLY interviews ANDRE VLTCHEK about his recent experiences in Bolivia and his knowledge and insights about what that country is currently undergoing as well as his insight into other Latin American countries. Philosopher, novelist, filmmaker, investigative journalist, poet, playwright, and photographer, Andre Vltchek is a revolutionary, internationalist and globetrotter who fights against Western Imperialism and the Western regime imposed on the world. He has covered dozens of war zones and conflicts from Iraq and Peru to Sri Lanka, Bosnia, Rwanda, Syria, DR Congo, and Timor Leste. Andre has produced and directed several documentary films for the left-wing South American television network teleSUR. They deal with diverse topics, from Turkey/Syria to Okinawa, Kenya, Egypt, and Indonesia, but all of them are exposing the effects of Western imperialism on the planet. Andre’s many books include: “Revolutionary Optimism, Western Nihilism,” “The Great October Socialist Revolution: Impact on the World and Birth of Internationalism,” and “Exposing the Lies of the Empire.” Andre’s investigative works appear in countless publications worldwide. He frequently speaks at revolutionary meetings as well as at principal universities worldwide. More about Andre can be found at andrevltchek.weebly.com. He tweets @AndreVltchek.

In the second half-hour, Host TIOKASIN GHOSTHORSE welcomes PRESIDENT SHELLEY BUCK from Prairie Island Indian Community in Minnesota to discuss current environmental and nuclear situations facing the Prairie Island people. President Buck is serving her fifth term on Prairie Island Tribal Council and third term as president. Prior to being elected Tribal Council president, President Buck held other positions within the Prairie Island Indian Community government, including Tribal Council secretary and assistant secretary/treasurer, enrollment clerk in the Prairie Island Enrollment Office and government relations specialist for the Tribe. President Buck has a bachelor’s degree in business accounting from Indiana University and a master’s degree in sports management from Concordia University. She is currently working on a second master’s degree in tribal Indian law from the University of Tulsa. President Buck currently serves on the boards of the Minnesota Wild Foundation, the St. Paul Chamber of Commerce, and the Great River Passage Conservancy in St. Paul. She also served on the Native Vote Alliance of Minnesota board and, most recently, was elected vice-chair of the Minnesota Indian Affairs Council.