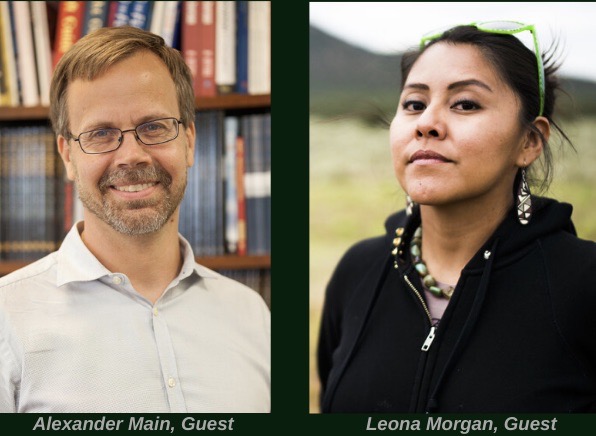 ANNE KEALA KELLY (Kanaka ‘Ōiwi) is in studio this week as Guest Host of “First Voices Radio.” She speaks with two guests during this episode. Keala continues a dialogue in the first half-hour about recent events—and much more—in Bolivia and other Latin American countries that was started by Host Tiokasin Ghosthorse last month.  ALEXANDER MAIN, Director of International Policy at the Center for Economic and Policy Research in Washington, D.C. In his work at CEPR, Alex monitors economic and political developments in Latin America and the Caribbean and regularly engages with policymakers and civil society groups from around the region. His areas of expertise include Latin American integration and regionalism, US security and counternarcotics policy in Central America, US development assistance to Haiti, and US relations with Bolivia, Brazil, Ecuador, Honduras and Venezuela. He is regularly interviewed by national and international media and his analyses have been published in a variety of outlets including The New York Times, Foreign Policy, the Los Angeles Times, The Hill, NACLA, Dissent, Pagina/12, and the Monde diplomatique. Prior to CEPR, Alex spent more than six years in South America working as a foreign policy analyst and an international cooperation consultant. He holds degrees in history and political science from the Sorbonne University in Paris, France and is fluent in Spanish and French. In the second half-hour, Keala talks about the subject of “Nuclear Colonialism”—especially in the southwestern United States—with LEONA MORGAN. Leona is an Indigenous community organizer and activist who has been fighting Nuclear Colonialism since 2007. She is focused on preventing new uranium mining, nuclear waste dumping, and transport of radioactive materials in the southwestern United States. Leona co-founded and works with Haul No! (www.haulno.org), Radiation Monitoring Project (www.radmonitoring.org), and Nuclear Issues Study Group (Nuclear Issues Study Group). Leona is Diné from the Navajo Nation and lives in Albuquerque, New Mexico.