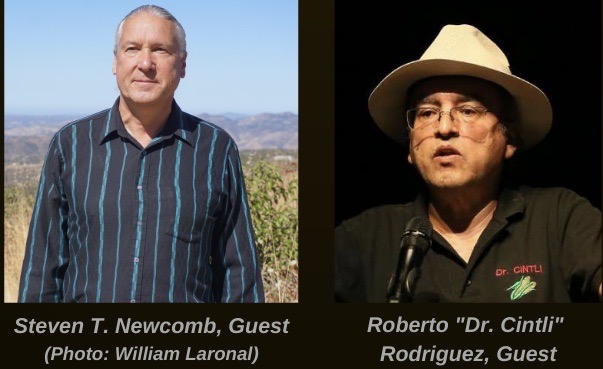 Host Tiokasin Ghosthorse focuses attention on Bolivia again this week. He welcomes two guests who will be sharing the hour with him to discuss what’s at the root of the issue from a historical and contemporary perspective not only in Bolivia but also in other Latin American countries. His two guests for the hour are Steven T. Newcomb and Roberto Cintli Rodriguez—"Dr. Cintli."

STEVEN T. NEWCOMB (Shawnee, Lenape) is a scholar, educator, author, journalist, film producer, public speaker, and workshop leader/facilitator. He is internationally recognized for his more than three decades of research and writing on the origins of federal Indian law and international law dating back to the early days of Christendom, most notably focused on the religious doctrine now known in history as the Doctrine of Christian Discovery. He is the author of "Pagans in the Promised Land: Decoding the Doctrine of Christian Discovery" (Fulcrum Publishing, 2008) and a Producer of the 2015 documentary film, "The Doctrine of Discovery: Unmasking the Domination Code” directed and produced by Sheldon Wolfchild (Dakota).