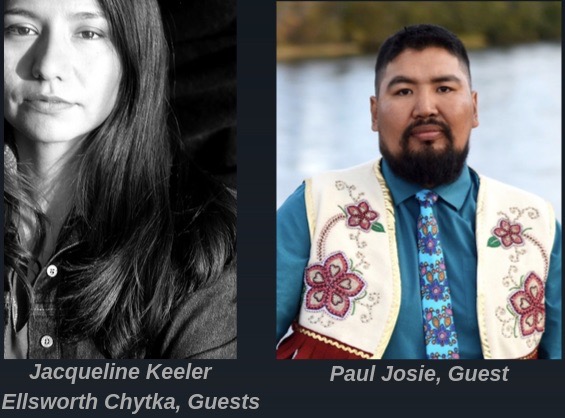 JACQUELINE KEELER and ELLSWORTH CHYTKA - Jacqueline is a Diné/Ihanktonwan Dakota writer. Her book “The Edge of Morning: Native Voices Speak for the Bears Ears” is available from Torrey House Press and the forthcoming “Standing Rock to the Bundy Standoff: Occupation, Native Sovereignty, and the Fight for Sacred Landscapes” will be released next year. Ellsworth Chytka is a Yankton elder who will be talking about his home near Lake Andes in South Dakota, an area that has been greatly impacted by recent, devastating flooding. Tiokasin will talk with Jackie and Ellsworth about the flooding and what it has done to the people and the land in that area of South Dakota.

PAUL JOSIE a Vuntut Gwich'in First Nation Citizen from Old Crow, Yukon, in Canada. Paul is a lifelong resident of Old Crow, the northernmost community in Yukon. Paul served as a Vuntut Gwich'in councilor for seven years and now runs his own winter tourism business, Josie’s Old Crow Adventures. Paul’s homeland is being greatly affected by climate change. I want to talk with Paul about what it’s like living in a place that has declared a “climate emergency.”