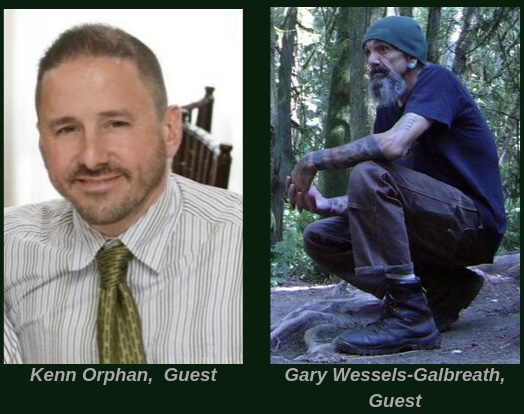 KENN ORPHAN is an artist, writer, radical nature lover, weary but committed activist, and hospice social worker. He writes about art and culture, socio-economic injustice, geopolitical issues and the existential threats we collectively face from corporate capitalism, the war industry, climate change, and an ever imperiled biosphere. Kenn’s work focuses on the desperate need for a global paradigm shift that fosters compassion for and solidarity with the suffering of humanity and the countless other species with whom we share this precious planet. He blogs at kennorphan.com. The intent of his blog is to bear witness to the dire events unfolding around us without any pretense of false hope and to share insights and reflections through the transformative lens of solidarity. GARY WESSELS-GALBREATH hosts “View From The Shore,” featuring traditional and contemporary Native music, which airs Sundays from 6 to 8 pm Pacific Time on KAOS 89.3 FM in Olympia, Washington. Originally titled “Indian Time,” the show started airing on February 6, 1986 (ten years to the day of Leonard Peltier’s illegal extradition from Canada). Each week, the show ends talking about Peltier and with “Sacrifice,” a song by Robbie Robertson. After 33 years, The View From The Shore” is now one of the longest-running Native radio programs. Gary is also a fine art photographer, who has been capturing the world on film since he was 12 years old.