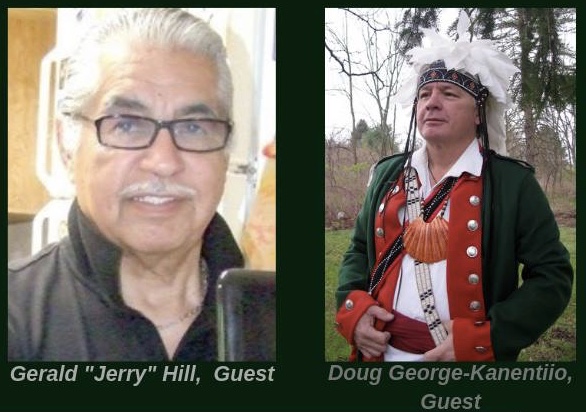 GERALD "JERRY" HILL is an enrolled member of the Oneida Nation in Wisconsin. He is President of the Indigenous Language Institute in Santa Fe, New Mexico, and has been a member of the Indigenous Language Board of Directors since 1997. A second language speaker of Oneida, Jerry has years of experience in the field of Native language revitalization. Jerry is an elected Chief Appellate Judge of the Oneida Nation. He has a bachelor’s degree in Linguistics from California State, Northridge and a JD from the University of California, Davis. Jerry and Tiokasin will talk about "second language" speakers who dedicate themselves to achieving speaking proficiency and eventual fluency in their Native languages. It’s the theme of the Indigenous Language Institute’s annual symposium taking place in Santa Fe, New Mexico on October 21-23. More about ILI at www.ilinative.org.

DOUG GEORGE-KANENTIIO was born and raised at the Mohawk Territory of Akwesasne. He attended school on and near the reservation before enrolling at Syracuse University and then the Antioch School of Law. He was a co-founder of the Native American Journalists Association before serving the Mohawk Nation as editor of the journals Akwesasne Notes and Indian Time. He worked with the late Vine Deloria on the Traditional Knowledge conferences before joining the Board of Trustees for the Smithsonian’s National Museum of the American Indian. He is currently vice-president for the Hiawatha Institute for Indigenous Knowledge. Doug currently resides within Oneida Iroquois Territory with his wife Joanne Shenandoah. Tiokasin and Doug will discuss one of Doug's recent columns, titled "On Prophecy and the Enlightened Ones." http://bit.ly/2lOEBOJ