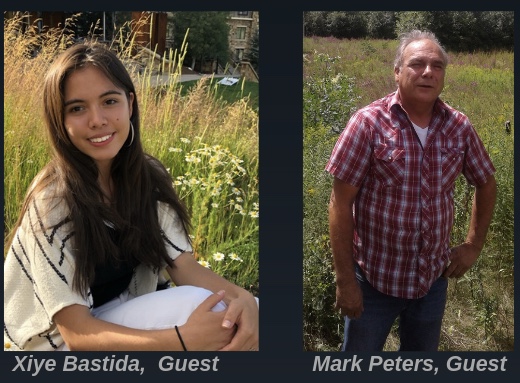 XIYE BASTIDA, (Otomi-Toltec), a teenage climate activist based in New York City. She is one of the lead organizers of the “Fridays For Future” youth climate strike movement. For the first climate strike in March, 2019, Xiye mobilized 600 students from her school and has taken a citywide leadership role in organizing climate strikes and speaking out about climate justice issues in rallies and town halls. Xiye was born and raised in Mexico as part of the Otomi-Toltec Indigenous peoples.

MARK PETERS,  Mark is the historian for and member and resident of the Munsee-Delaware Nation located on the Thames River in southwestern Ontario, Canada. Mark is a former Chief and Councillor, and has been directly involved in First Nations issues for over 30 years. He has presented the history of his people in a variety of forums. Mark has also been directly involved in the justice system over the years, as a lawyer, and has a good understanding of Aboriginal Rights and First Nations legal issues. Mark’s ancestors have had an interesting and often tragic journey from the period of first contact in the northeast of America to our present location in Canada.