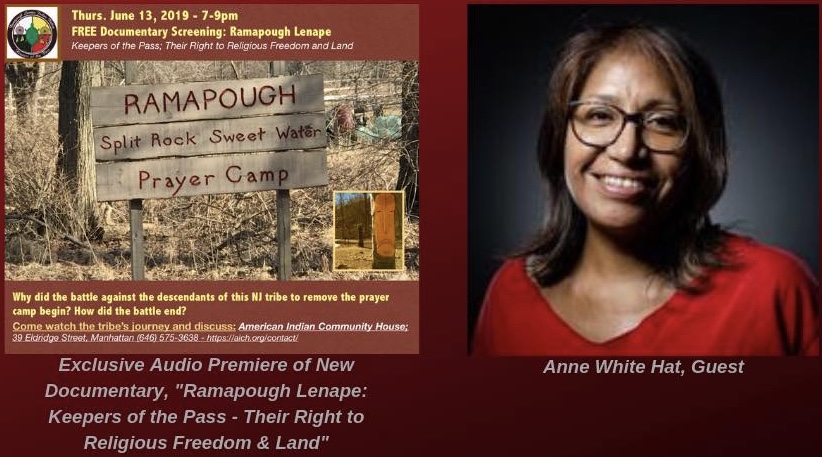 In the first half-hour, First Voices Radio aired an exclusive audio premiere of a new documentary, titled: “Keepers of the Pass.” The documentary covers the 2-year saga of the ordeal brought by the Rampough Lenape of New Jersey and their right to pray on land they own across the road from a private community that did not want them there. The land is called the Split Rock Sweetwater Prayer Camp. “Keepers of the Pass,” a Human Rights and Fifth Estate Production, was videotaped over several months during the conflict, was created to share with communities suffering racial abuses and similar encroachments on constitutional rights.

in the second half, ANNE WHITE HAT is a member of the Aske Tiospaye (clan) of the Sicangu Lakota Oyate. The Sicangu Lakota is one of the Oceti Sakowin, the Seven Council Fires of the Lakota Oyate (the Lakota Nation). Anne’s father is a direct descendant of Chief Iron Shell, and her grandfather was Chief Hollow Horn Bear. Her traditional homelands encompass the Black Hills and prairies of the upper midwest, known as South Dakota.  Anne has resided in Louisiana since 2010.

Anne is one of the Indigenous women who have been central to the leadership of the campaign to stop construction of the Bayou Bridge Pipeline, which is designed to carry oil from Lake Charles 162 miles across the state to St. James parish, 30 miles west of New Orleans.  Anne was arrested on September 18, 2018, after leading a prayer ceremony at a boat launch near St. Martinville, Louisiana, and charged with two felony counts under La. R.S. 14:61 for unauthorized entry of a critical infrastructure that allegedly occurred on September 3, 2018, near a pipeline construction site in the Atchafalaya Basin. White Hat had been present on the property in question as a Water Protector with the permission of co-owners of the land. She engaged in a non-violent protest against, and monitoring of, the pipeline project and was trying to raise awareness about the fact that the pipeline was being constructed on the property illegally, a fact later confirmed as the company was found by a Louisiana court in December 2018 to have been trespassing at the time.

Anne is the proud mother of three amazing children as well as an experienced herbalist. During the struggle at Standing Rock to stop the Dakota Access Pipeline she returned home to treat Water Protectors at Sacred Stone, Rosebud, and Oceti Sakowin camps. Speaking of this experience, Anne said, “Folks at Standing Rock took a beating for us, every day. They suffered a lot of emotional trauma. A lot of it was trauma that had been in our DNA as Indigenous people — we had suffered these things and survived these things.” She stressed the importance of “decolonizing everything … so that we can rebuild our nations and ourselves because it is possible to do that.”

Anne has been featured in the media for her activism fighting to defend the earth from oil and gas pipelines, including in The Guardian, Lakota Country Times and Now This News.  She is currently facing the possibility of prosecution for the two felony charges that are subject to five years imprisonment each and is a plaintiff in the Center for Constitutional Rights case, White Hat v. Landry.