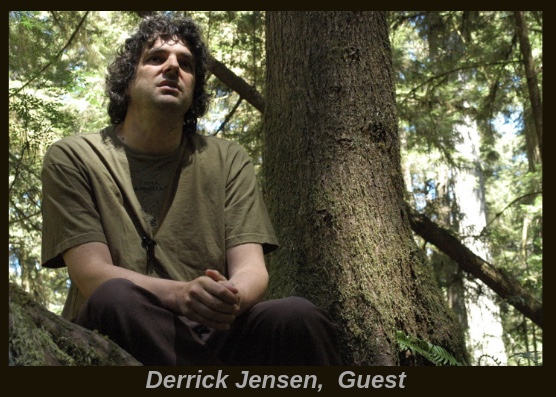 DERRICK JENSEN is a long-time grassroots environmental activist  Derrick is the author of more than 25 books, including: “A Language Older Than Words,” “Endgame,” and “The Myth of Human Supremacy.” Derrick is primarily an advocate for Indigenous peoples and wild nature, and an opponent of civilization, rejecting the notion that it can ever be an ethical or sustainable model for human society. He describes the linguistically and historically defensible definition of civilization as "a culture — that is, a complex of stories, institutions, and artifacts — that both leads to and emerges from the growth of cities (civilization, see civil: from civis, meaning citizen, from Latin civitatis, meaning state or city),and  the definition of city as a group of "people living more or less permanently in one place in densities high enough to require the routine importation of food and other necessities of life." He explains that, by such definitions, civilizations and cities are both unsustainable: "Two things happen as soon as you require the importation of resources. One of them is that your way of living can never be sustainable, because, if you require the importation of resources, it means you've denuded the landscape of that particular resource, and, as your city grows, you'll denude an ever-larger area. ... And the other thing it means is that your way of life must be based on violence, because if you require the importation of resources, trade will never be sufficiently reliable because, if you require the importation of resources and the people in the next watershed over aren't going to trade you for it, you're going to take it."