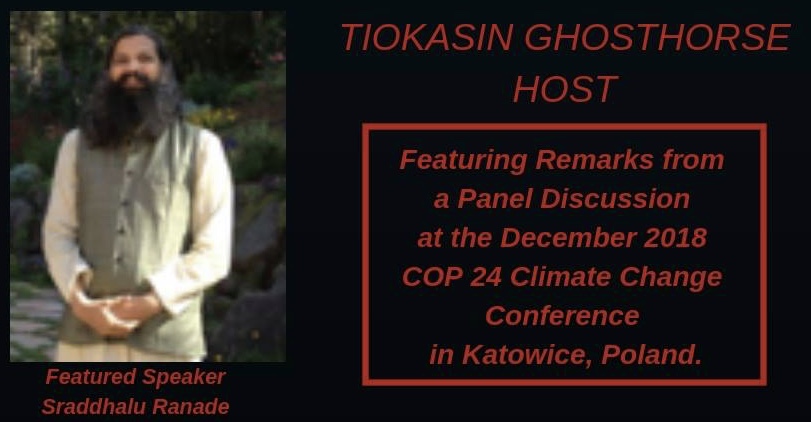 In the first half-hour of this week’s edition of “First Voices Radio,” we feature two speakers from a panel at the COP 24 Climate Summit, a two-week conference that was held in Katowice, Poland in December 2018. (COP 24 is the acronym for the 24th Conference of the Parties to the United Nations Framework Convention on Climate Change.) The excerpt of the panel discussion features two speakers: Tiokasin Ghosthorse and Sraddhalu Ranade. They address the need for a complete change to the social and economic systems that are driving the climate crisis.

Sraddhalu Ranade is a scientist, educator and dedicated scholar on the teachings of the late Indian sage Sri Aurobindo. He has lived all his life at the Sri Aurobindo Ashram in Pondicherry and studied under the tutelage of M.P. Pandit, one of the close disciples of Sri Aurobindo and the Mother. Ranade leads retreats, delivers talks and conducts workshops on a range of themes, including Vedic philosophy, ecology, and worldview, integral education, self-development, Indian culture, science and spirituality, spiritual evolution and yoga. Over the years he has addressed many thousands of students on these topics from numerous schools, colleges and universities all over India and has conducted numerous intensive teacher-training workshops in integral and value-based education. Ranade holds a deep interest in the spiritual evolution of mankind as taught by Sri Aurobindo in the current framework of our global community as well as from a cultural and historical perspective. He is the ​author of the widely acclaimed book, “Introduction to Integral Education.”

The second half of the broadcast features two sets of remarks, the first from the late Russell Means (Lakota) at The 1980 Black Hills Alliance: The Survival Gathering” and the second from the late John Trudell (Isanti Dakota), “What Happened to the Tribes of Europe” from DNA Descendant Now Ancestor 2000.