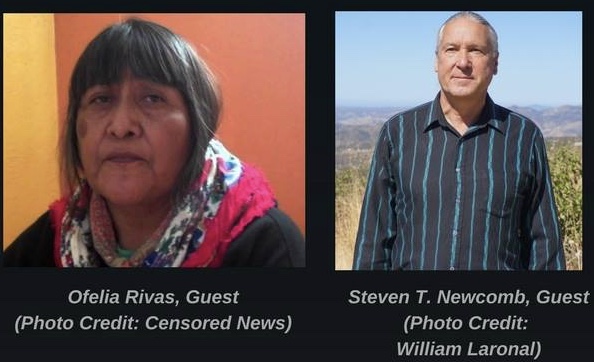 Host Tiokasin Ghosthorse welcomes back Ofelia Rivas. Ofelia is an elder and activist from the Tohono O'odham Nation. She is the Founder of O’odham Rights Cultural and Environmental Justice Commission, and Founder of O’odham Voice Against the Wall.

In the second half-hour, Steven T. Newcomb (Shawnee, Lenape) is a scholar, educator, author, journalist, film producer, public speaker and workshop leader/facilitator. He is internationally recognized for his more than three decades of research and writing on the origins of federal Indian law and international law dating back to the early days of Christendom, most notably focused on the religious doctrine now known in history as the Doctrine of Christian Discovery. He is author of "Pagans in the Promised Land: Decoding the Doctrine of Christian Discovery" (Fulcrum Publishing, 2008) and a Producer of the 2015 documentary film, "The Doctrine of Discovery: Unmasking the Domination Code."